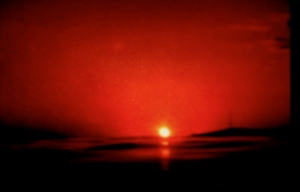 It starts with the sea in the morning. The water is blue; the sun is rising and becomes brighter every second until it fills up the screen as a white nucleus with yellow edges. The edges become orange, the camera is pulled back little by little, so the picture changes. More and more, the sea is growing, the sun is darkening. Mountains appear in the background, later a landscape appears in the foreground, and the landscape is slowly but constantly moving. And so are the lights and the colors. At the end everything is dark. The day is over. Director Naoto Kawamoto (23) delivers an experimental film about light, color and reflections in nature. The sea and the sun are shown alternately, but not too fast. A film to enjoy capturing the beauty of nature and to launch the viewer into philosophy – just like “Whirling Current”, the film Kawamato presented last year at Berlinale shorts. This is the sequel.

#Repost @berlinale
More than 100 Russian artists and animators along with musicians and sound-designers have made and keep making animated shorts in protest of Russia’s invasion of Ukraine. @sasha_svirsky (#BerlinaleShorts2020 and #BerlinaleShorts2021) is one of them.
A collection of press reviews on all the films of Berlinale Shorts is waiting for you in the press section of our blog.
"I like the shape of the house.
"My favorite scenes are when the main character, a boy, strokes the fur on the bird's neck with his hand, and when the boy peels a tangerine for the dog. The reason is that both of these are movements I wanted to draw, regardless of the story." More information on "Bird in the Peninsula" by Atsushi Wada is available on the Berlinale Shorts blog.
"My main mission was to find locations and people which consist with “cinematic” energy. It was a strong and pure energy similar to my childhood memories." Find out what else Anastasia Veber had to say about the starting point for her film "Trap" on our blog.
Lade Kommentare …
%d Bloggern gefällt das: